The Rockefeller University, founded in 1901 as The Rockefeller Institute for Medical Research, was conceived by the Reverend Frederick Taylor Gates, a trusted advisor to John D. Rockefeller, Sr, who was influenced by reading Osler's Principles and Practice of Medicine. The institute that Gates envisioned and that its original Board of Scientific Directors created was a new research facility dedicated exclusively to the scientific study of medicine. The charter of the Institute stated its mission to develop a scientific understanding of "the nature and causes of disease and the methods of its treatment, and to make knowledge relating to these various subjects available for the protection of the health of the public and the improved treatment of disease and injury." A research hospital was mandated as an essential ingredient of the institute.

The mission of basic medical science and the fundamental organization of the Institute at its inception have continued essentially unaltered, research programs have evolved markedly and there has been a steady addition of faculty, buildings and other physical resources for the support of the scientific activities of the institution.

Academic diversification at Rockefeller, especially involving nonclinical sciences, prompted a change in name in 1958 from The Rockefeller Institute for Medical Research to The Rockefeller Institute. In the mid-1950s, the Institute initiated a program of graduate education in the various disciplines represented on its campus and offered a PhD degree program. This prompted another change in name in 1965 to The Rockefeller University. The PhD program continues today and has a total of about 165 graduate students. Further growth of its educational endeavors came in 1972 when an MD-PhD program was initiated with Cornell University Medical College. This program expanded in 1991 to become tri-institutional when Cornell's Medical College and Graduate School of Medical Sciences and the Sloan-Kettering Institute merged their programs with Rockefeller. The tri-institutional MD-PhD program enrolls 36 students each year.

Throughout its history, the University has made major contributions to medical science. A remarkable number of faculty members have received Nobel Prizes, Albert Lasker Awards, National Medals of Science, and MacArthur Foundation fellowships. Similarly, a remarkable number have been elected to membership in the National Academy of Science and the Institute of Medicine (http://www.rockefeller.edu/about/). 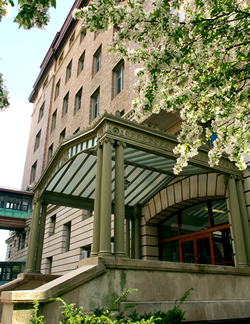 Rufus Cole, the Hospital's first director, was a major architect of clinical science. He set the permanent course of the Hospital as an independent, central unit of the Rockefeller Institute. Thus, from its opening in 1910, the Hospital was completely equipped to conduct its own research programs. This permitted physicians to engage in fundamental studies in Hospital laboratories on the disease problems they dealt with on the wards of the Hospital. Cole also intended that research from the Hospital would eventually "play its part in the reorganization of medical teaching in this country." A new kind of scientist emerged from this pioneering model of the research Hospital: the clinical investigator who serves as a link between the practicing physician and the basic scientist.

By 1940, nearly half of the major positions in academic internal medicine in the United States were filled by Hospital alumni trained in clinical investigation. Among the many important scientists associated with the Rockefeller Hospital are Oswald Avery, Colin MacLeod and Maclyn McCarty, who established that DNA is the genetic material; Donald Van Slyke, father of clinical chemistry; Rene Dubos, whose work led to the first rationally developed antibiotic; Rebecca Lancefield, who developed a classification system of the streptococci; Henry Kunkel, a founder of clinical immunology; Vincent P. Dole, Marie Nyswander and Mary Jeanne Kreek, who inaugurated methadone treatment of heroin addiction.

Over the Hospital's history, interactions between clinical and nonclinical scientists have taken many productive forms that have greatly advanced the life sciences. Some major contributions include the development of the oxygen chamber, influenza immunization, treatment for African sleeping sickness, the Van Slyke manometric apparatus, methods for blood transfusion and blood storage, diagnostic tests for lead poisoning, the detailed characterization of numerous diseases including poliomyelitis, Wilson's disease, and most recently, the development of multiple drug therapy of HIV infection. As part of the celebration of the Hospital's Centennial in 2010, more than 100 examples of scientific discoveries leading to medical advances were described (http://centennial.rucares.org/homepage.php).

Until 1963, the Hospital was supported entirely by institutional funds. From 1963 until 2006 it was funded by both Rockefeller University and the General Clinical Research Center (GCRC) Program of the National Institutes of Health (NIH). In September 2006, the University was awarded a Clinical and Translational Science Award (CTSA) from the NIH National Center for Research Resources. The award, the successor to the GCRC Program, led to the establishment of the Rockefeller University Center for Clinical and Translational Science, and provided additional resources to complement those coming from the University for the support of the University's human subjects research.

The 20 bed inpatient facility was renovated in 2001 and the Robert & Harriet Heilbrunn Outpatient Research Center was completely renovated in 2003 and expanded to 11 examination and consultation rooms.